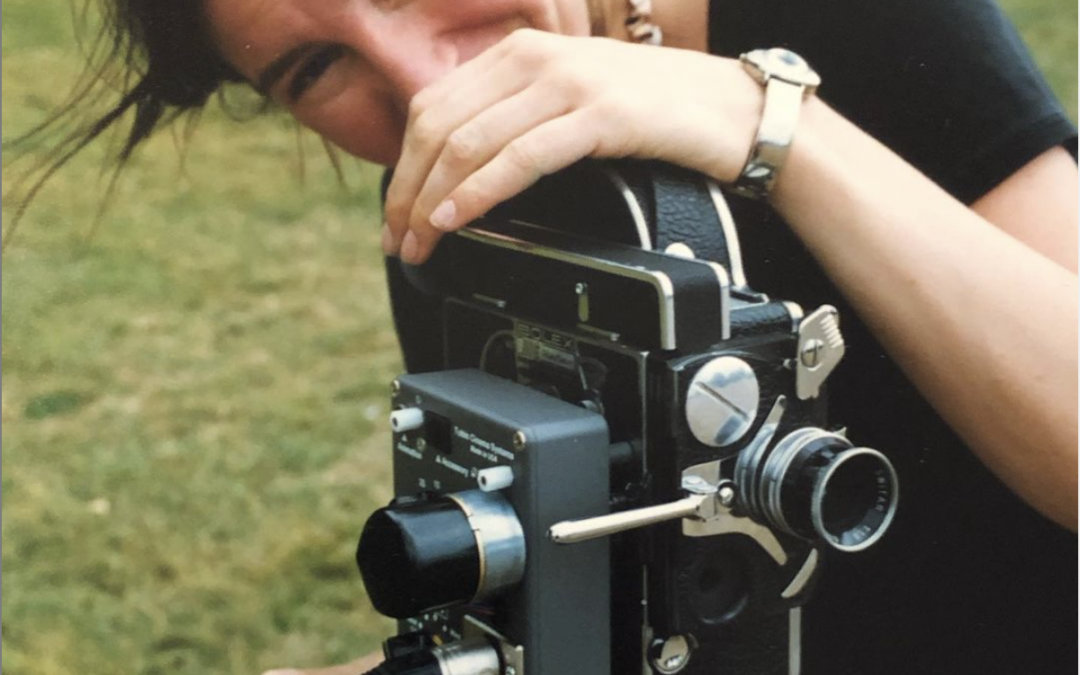 Tell us a little about yourself, what projects are you involved in now.

My name is Liane Lang, I live in East London and I am currently working on a project called Glorious Oblivion, a collection of around 150 works with public statues to women which I took around several European Cities.

One aspect of your work deals with how women are portrayed in history. Can you tell us a little more about this.

The project started with the perhaps rather obvious observation that historic women are largely not portrayed in public places. There is only a tiny number of statues to women in most cities. I started searching for them and trying to collect even the most obscure little bust in a suburban park in the places that I visited, Athens, Rome, Berlin and several others. The way women are portrayed is a large subject and diverges by era, country and the type of person portrayed. A good example how perhaps not to do it, is the statue of George Sand in Paris, a woman who liked to wear men’s clothing was portrayed wearing an exuberant frilly frock. Statues don’t do all that much to hold people in the memory though, a bust is not a sufficient means of retaining a legacy. The basic condition is that we forget almost everyone from history and those we do remember, through constant and persistent retelling, we usually remember erroneously. This applies to men and women alike. The most salient fact we know about someone is usually one that isn’t true. Like Marie Antoinette didn’t say let them eat cake and Elizabeth I never beat the Spanish Armada. There is no evidence that Mary Magdalene was a prostitute. Someone’s propaganda goals created a narrative that had much more traction than the more mundane truth. We are engaged in this process all the time, even right now reputations are destroyed by complex machinations of power, just look at Camila Batmanghelidjh.

I am inspired by rebel attitudes, out of the box creative thinking that challenges the status quo – have you got a favourite character in history that imbues those qualities – can you tell us a little more about them?

I find that very difficult to answer. Out of the box is an expression that means almost nothing to me. I suppose that most people operate within severe limitations and some manage to go further in their career goals or social circumstances than their origins, gender or time would commonly allow. Those who manage to escape limiting circumstances have some help in doing so, it’s not that others were too stupid or unimaginative. Juana Ines de La Cruz, a prominent Mexican scholar, was clearly extremely academically gifted. She couldn’t however have learnt Latin at aged 8 if her father hadn’t had and given her access to a large library and supported her in her learning endeavours. These conditions were not available to all the other academically gifted girls in 18th century Mexico, hence we don’t know what they might have written. She also had to join a nunnery to carry on her studies, a rather big life sacrifice and even then she was eventually silenced by her bishop, who felt it was time to get rid of this woman, who  suggested girls should be educated. I admire many people’s great achievements from the past, of course, but in the past and in the present, who is able to develop their potential is a tiny minority of privileged people. I am sure there are large numbers of girls in Afghanistan who would have great things to contribute to every possible field of human endeavour, but instead have to marry at 13. Virginia Woolf is still the person who has put it the most succinct, ‘You can be a writer if you have a room of your own and 500 a year.’

It is a known fact that women are underrepresented within the art world – why do you think that is the case? Is there anything we can do?

This leads me neatly on to your question about the underrepresentation of women in the art world doesn’t it… The underrepresentation in institutions and major collections and hence in the upper ranks of sale prices and auction records is what we should say, because in the less well remunerated part of the art world women are extremely well represented. Women’s work is generally valued less and women are much more profoundly questioned. This is I believe part of a self perpetuating mechanism generated by our response to success and failure. German author Bernd Kramer writes wonderfully on this subject. He says that success or failure is to a very large part a result of luck, people who make it big usually encounter a number of extremely fortunate circumstances that propel them forward, being in the right place at the right time, meeting the right person, being the right person. Like being the world expert in coronavirus vaccine research in 2019 for example. You can’t plan for that, but when it happens, boy will you be busy.

Kramer says that we cannot accept luck to be at the bottom so we reverse engineer a story of greatness to account for success, we start to see fabulous ability in bouncing toddlers that later become rock stars. We listen to successful people’s earnest advice about working hard and getting up in the morning, sleeping 6 hours a night, or 9, eating no meat or meditating in order to find the secret to opening the door to greatness. I am going the long way round here, I am sorry. To get back to your question, the same applies to failure. When people seem to have been at it for a long time and have no success, we look at them for signs of deserving failure. We try to engineer a set of reasons that explain why their acting never took off, why their scientific career ended in a dead end research project or why their paintings never made it to Hauser and Wirth. Women have a history of failure. A very long history of not making it. So we look at women and search for signs of weakness, intellectual or technical lack of ability. Looking for greatness and looking for failure will result in finding the thing you look for, of course. To break this cycle will take generations of women, gradually becoming more successful, more expensive, a better asset class and they will make their way into the top of the pyramid. It will happen after lots of female CEOs and fund managers start art collections.

Having known you for while you are quite fearless, walk into a room and literally talk to anybody – do you have a ritual or tip for getting  into that mindset?

Ha, well. It’s hard to remember the times when I walked into a room full of strangers right now. It seems like another life. I tend to approach social interactions with people I don’t know with the attitude that this person is likely to be very interesting. It’s extremely rare that people don’t talk to you, brush you off or aren’t very friendly, most people are polite and even kind. But if that does happen and someone is rude to you, you have to be a bit Zen about it. That person is not meant for you, move on. If you take neither success nor failure too personally you can carry on doing your thing unencumbered by the judgement of others. This I think is the best place to be as an artist. I find that if I am in a room full of art world professionals I like to avoid talking about my work to people unless they ask. It’s usually more interesting to discuss what somebody has been reading.

Some of the effects of lockdown and Covid, have been that people seem to desire items with meaning, that have been made responsibly. How do you think this has been translated in the art world? Have you seen any new trends forming?

I think people have always bought things that they have a personal connection to, a picture that reminds them of holidays as a child or the like. Really big money is only spent on works that appear like a good investment. This is judged by how many other people have spent a lot of money on it previously. I haven’t seen anything change there during COVID.

Do you have a favourite piece in the Le Ster collection?

I love all your work. I have a particular penchant for the cherry bomb and titanium salute rings and the brocade necklace. Looking at them makes me think of those wonderful days ahead going to dinner and the theatre, enjoying a private view at a gallery and talking to lot’s of interesting strangers in a crowed room ☺

What piece of advice would you give your younger self?

This is such a simple and yet impossible question. I would recommend to my younger self not to waste any time on boyfriends, none of them turned out to merit the time or energy. But then of course we don’t really choose to do these things, as Ramachandran says the mind is an Elephant, the conscious mind is just riding it. I would definitely recommend my younger self to focus more on making some money and getting a flat. I spent far too long labouring away in conditions of poverty that prevented me from making the things I wanted to make. Chances are though I would just give my younger self lots of typically conservative middle aged advice, which she was better off not having…